St Ann’s Church of England Primary School is situated in the Diocese of Liverpool and St Helens Local Authority. The school is part of a Multi Academy Trust; The Three Saints Academy Trust.

Admission arrangements are determined by the Trust of the schools in consultation with the Diocesan Board of Education, the relevant Local Authority and other admission authorities in the relevant area.

The Admission Number for the 2022 reception year intake at St Ann’s Church of England Primary School is 60.

All applications will be considered at the same time and after the closing date.

After the admission of pupils with an Education, Health and Care Plan which names the relevant school and where there are more applications than places available the Directors of the Trust will apply the following over-subscription criteria :

1. Looked after children or children who were previously looked after but immediately after being looked after became subject to an adoption, child arrangements or special guardianship order 1 including those who appear to have been in state care outside of England and ceased to be in state care as a result of being adopted.

2. Children who have a brother or sister at the school at the time of likely admission. This includes full, half or stepbrothers and sisters, adopted and foster brothers and sisters or a child of the parent/carer’s partner, and in every case who is living at the same address and is part of the same family unit.

3. Children whose parent(s) regularly attend a Church of England church. (A parent is any person who has parental responsibility or care of the child.) Regular attendance shall be defined as public worship for at least once a month and for at least 2 years before application. This would need to be confirmed in writing by a member of the clergy or a church officer and submitted by the parent with their application form. In the event that during the period specified for attendance at worship the church has been closed for public worship and has not provided alternative premises for that worship, the requirements of these admissions arrangements in relation to attendance will only apply to the period when the church or alternative premises have been available for public worship.

4. Children whose parent(s) regularly attend another Christian church that is a member of Churches Together in Britain and Ireland (www.ctbi.org.uk) or a place of worship which is associated with the UK Interfaith Network (www.interfaith.org.uk). (A parent is any person who has parental responsibility or care of the child.) Regular attendance shall be defined as public worship for at least once a month and for at least 2 years before application. This would need to be confirmed in writing by a member of the clergy or a church officer and submitted by the parent with their application form. In the event that during the period specified for attendance at worship the church has been closed for public worship and has not provided alternative premises for that worship, the requirements of these admissions arrangements in relation to attendance will only apply to the period when the church or alternative premises have been available for public worship.

1 A looked after child is a child who is (a) in the care of a local authority, or (b) is being provided with accommodation by a local authority in the exercise of their social services functions (see the definition in Section 22(1) of the Children Act 1989).

2 A child is regarded as having been in state care in a place outside of England if they were accommodated by a public authority, a religious organisation or any other provider of care whose sole purpose is to benefit society. Applications must be supported with appropriate evidence that the child has been adopted from state care.

In the event of any over-subscription in the number of applications made under any of the categories above then the Admissions Committee will offer places first to children whose family home is nearest the school. The measurement shall be done by the Local Authority in a straight line using a Geographical Information System (GIS) based on Local Land and Property Gazetteer (LLPG) data and the National Grid co-ordinates for the family home and the school. Where the tie-break does not distinguish between applicants e.g children living in the same block of flats random allocation will be used. This will be done by drawing lots and supervised by someone independent of the school.

This is the confirmed address (before allocation procedures begin) where the child and parent, or person with parental responsibility, normally live. If you are separated and your child spends time at each parent’s address, the address we shall use is that of the main carer. We use the address of the parent who is in receipt of child benefit for this. It may be necessary for the Governing Body to carry out checks to confirm that addresses given are genuine. You may, therefore, be asked to produce documentary evidence of your child’s address e.g. Council tax or utility bills.

Any change in your home address after you have completed the application form must be notified to the Admissions Section and supported by documentary evidence. Similarly, if you are unsuccessful in your application for your preferred school(s) and subsequently move address, you should notify the Admissions Section as this may affect your child’s position on the waiting-list(s).

Where the Directors discover that a child has been awarded a place as a result of any false information relating to the home address, proof of date of birth or involvement in a place of worship, it will withdraw the offer and your child will lose the place.

How places were allocated in September 2020 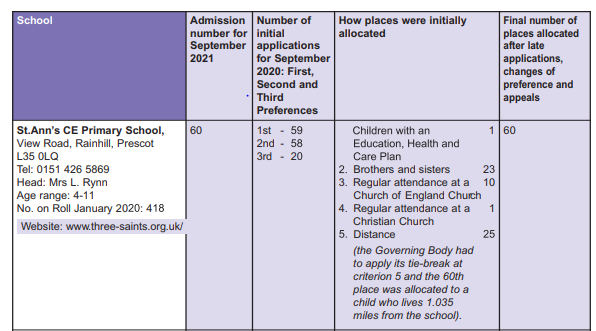 60th place allocated to a child who lived 0.548 miles from the school.

Parents may request that their child’s entry be deferred until later in the same school year, where the child is not of statutory school age. However, they would not be able to defer entry beyond the academic year for which the original application was accepted, if they did, they would need to re-apply for the following year. The application would normally then be for a place in year 1 i.e. the correct chronological age group for the child. Parents are able to submit a request, supported by evidence, for admission in the reception year. The request will be considered in line with the requirements of the School Admissions Code. Before making the decision to defer entry parents are advised to speak to the Principal of the school.

During the normal admissions round, if a place is refused because the school is oversubscribed your child’s name will automatically be placed on the waiting list. The waiting list will be kept in priority order according to the oversubscription criteria and not on the date on which applications were received. If a place becomes available within the admission number, the child whose name is at the top of the list will be offered a place.

Children who are the subject of a direction by the local authority to admit or who are allocated to a school in accordance with the Fair Access Protocol will take precedence over those on the waiting list,

The waiting list will close at the end of the autumn term for the September 2021 reception year intake.

The Trust has a duty to comply with the Local Authority’s Fair Access Protocol and may have to admit above its published admission number, even if the year group concerned is full.

All schools must participate in their Local Authority’s protocol. For that reason, admission appeal panels will not view the fact that the school is obliged to admit over its admission number as an indication that it can do so for all in year transfers without causing prejudice to the efficient provision of education or efficient use of resources.

Applications for a place in reception year after the waiting list has closed or Years 1 – 6 should be made on the Local Authority’s in year common application form. The application will then be processed in accordance with St Helen’s/Halton’s in year co-ordinated admission scheme.

Parents will normally receive a written response to their application within ten school days.

Where parents are unsuccessful in applying for a school place, the decision letter will give reasons why the application was refused (in light of the published admission arrangements) notification of the right of appeal, including details of how, and to whom, to make an appeal and where to obtain further information.

Parents should be aware that legislation limits infant class sizes to 30 pupils and restricts the grounds upon which an appeal can be upheld. You would have to show that the decision was one which in the circumstances no reasonable governing body would have made, or that your child would have been offered a place if the governors’ admission arrangements had been properly implemented.